This week, we’re looking at the OT book of Jonah. Yesterday, we saw how Jonah was a prophet who was given a simple message of judgement to deliver to a hostile people – but ran away in the opposite direction. Unwittingly, he himself becomes an object lesson as he embodies Israel’s failure to live out her calling to be a light to the nations. (You probably want to read yesterday’s first, if you missed it.)

The next scene is the one made famous by many Sunday School lessons. As soon as Jonah hops on the boat to Tarshish, things start going wrong.

1:4 Then the LORD sent a great wind on the sea, and such a violent storm arose that the ship threatened to break up.

God sends a violent storm that threatened to wreck the ship. The sailors jettison all the cargo, and everyone starts frantically praying to their god for rescue.

1:5 All the sailors were afraid and each cried out to his own god. And they threw the cargo into the sea to lighten the ship. But Jonah had gone below deck, where he lay down and fell into a deep sleep.

Everyone prays to their gods except Jonah, who’s fast asleep below deck. Funny that, cause he’s the only one who worships the one true God – the one who made the wind and the waves. But he’s the only one not doing his “job” so to speak. Interesting.

1:6 The captain went to him and said, “How can you sleep? Get up and call on your god! Maybe he will take notice of us so that we will not perish.”

It’s just like Israel, who were not doing their job of being a light to the nations. Instead, they were running away to other gods, and putting their security in alliances to foreign nations. They were provoking God to discipline them, by bringing drought and famine and disaster upon them. Until they repented. Until they were left with nowhere else to turn but back to God.

Back on the boat, the sailors are desperate. They cast lots to see who’s causing the problem, and the lot falls to Jonah. He realises the game is up, and tells them it’s his God causing it all. Because he’s running away from what he was told to do.

1:9-10 He answered, “I am a Hebrew and I worship the LORD, the God of heaven, who made the sea and the dry land.” This terrified them and they asked, “What have you done?” (They knew he was running away from the LORD, because he had already told them so.)

Finally, God’s got Jonah’s attention. And in the first hint we get that Jonah is on the way to repentance, he tells them to throw him overboard, to save themselves.

1:12 “Pick me up and throw me into the sea,” he replied, “and it will become calm. I know that it is my fault that this great storm has come upon you.”

Finally, an unselfish action. Finally, he’s starting to show some concern for others. With nowhere else to turn, he starts turning back to God. 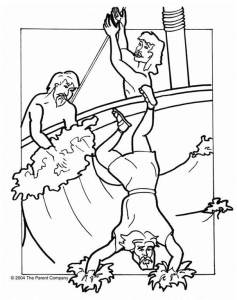 So Jonah gets tossed off the boat in the sea. Upside-down yet his man-skirt staying remarkably in place, if the children’s picture books are any guide. (You’ve seen the drawings, you know what I mean.)

And immediately, the storm abates.

Although much disaster, much hardship, much suffering endured by Christians is simply the fact that we live in a fallen world – maybe some of it is God trying to get our attention. Trying to discipline us, as Hebrews 12 says he does with all his children. Correcting us when we get too comfortable with being God’s people that it ceases to propel us out on mission. Reminding us that God is our only hope. And that others need him too.

Is God trying to get your attention?