This week, we’re going to take a look at the OT book of Esther. A book that Christians often ignore. Some of you, I’m guessing, might never have heard a sermon on Esther. Yet among the Jewish people, it’s one of the most popular stories. They read it out loud each year at the feast of Purim, a feast commemorating the events of this book.

(In fact, whenever Esther is read at the feast of Purim, every time the arch villain of the story is mentioned, the audience makes disparaging noises. A bit like a bad pantomime. Or if an Australian prime minister turns up to a sporting event. So whenever you read the name ‘Haman’ later in the story – he’s the bad guy – if you really want to get into the spirit of it, you need to boo and hiss. Maybe in your head, if you’re reading this on public transport. )

Anyway, although it’s popular among Jews, it doesn’t get that much attention from Christians. I wonder why? Maybe it’s because Esther is the only book in the OT not to mention a particular word. Which word? Below is a “wordle” of Esther, showing the frequency of words used. The bigger the word, the more times it’s used. What word is missing? 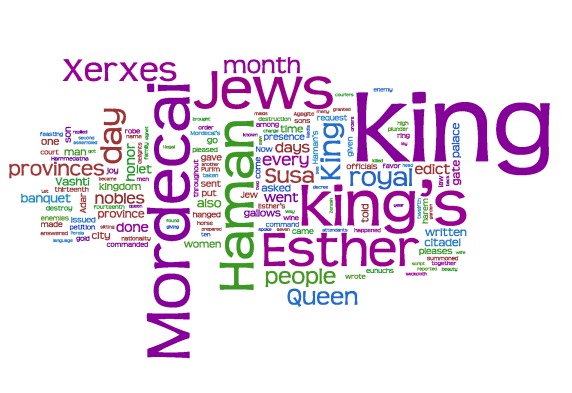 Esther is the only book in the OT not to mention God. And that’s not just a fun fact to file away for the next time you play Bible trivia. It’s quite possibly the key to understanding the whole story; to understanding what the book of Esther is doing in our Bible.

So this week, we’re going to go through the story of Esther. Because I’m guessing for most of us we’re not that familiar with it. And as we tell the story, we’re going to be paying close attention not just to what’s in the story. But also to what’s missing. Each day I’ll be narrating the action of a chapter or three, but if you want the complete experience, also read the full text in your bibles afterwards.

(And as we begin, let me acknowledge that for this approach to the story of Esther I’m indebted to my colleague at Morling College, Marc Rader. That’s the pretentious academic way of saying I’ve shamelessly ripped him off. But it’s with his permission, so it’s OK.)

1:1a ‘This is what happened during the time of Xerxes…’

So who’s Xerxes and how does he fit into the history of Israel?

Well that’s the first thing that’s missing from the introduction to this Bible story – the setting in Israel’s history. In fact, Xerxes is the ruler of the Persian empire – the empire which took over from the Babylonians. The Babylonians, you might recall, were the ones who carried the Israelites off into exile in 587BC, under King Nebuchadnezzar.

Now some of the exiles had returned to Israel in the time of King Cyrus. They’d even rebuilt the temple. But many Israelites, for whatever reason, stayed on in Persia. And this is where the story of Esther is set. Where many of God’s people were still living, scattered throughout the Persian empire, away from the land of Israel. But here, the narrator doesn’t mention any of that. Interesting.

All we get is that our story starts in the 3rd year of Xerxes’ reign. About 483BC. And Xerxes is one of the most powerful men who’s ever lived. He reigned over 127 provinces, stretching from India in the east, to Sudan in the West. And in the 3rd year of his reign, he decided to show off just how rich and powerful he was. We’re not told why – maybe he just hit 40, and sports cars weren’t invented in 483BC.

So he decides to throw a banquet for all his nobles – all the important people in the 127 provinces over which he ruled. Now in those days, apparently, it was the length of your banquet that counted. So for 180 days, the Bible says, ‘he displayed the vast wealth of his kingdom and the splendour and glory of his majesty.’

Now you think about the Olympic Games coming up next year in Rio. 16 days dedicated to displaying the splendour and glory of the host country. Think about all that goes into that. Well Xerxes did this for six whole months!

And at the end of it, when all of the impressees (is that a word?) headed off home, he threw another banquet for the inner circle. All those who lived with him in his stronghold, the citadel of Susa.

And this banquet lasted a whole week. The narrator describes in detail the sheer opulence of this banquet. Elaborate decorations. Hangings of white and blue linen, connected by silver rings to marble pillars. Couches made of gold and silver. It was like a Nick Scali showroom. Yet somehow even better.

Each guest was given an ornate golden goblet that was different from everyone else’s. And the wine flowed freely. Oh yes, the wine. It’s a bit of a recurring theme, as we’ll see. The king likes his wine. And at the king’s command – the only command in the story he comes up with on his own – everyone was to drink however they wished. He ordered the stewards to keep the supplies coming. Clearly, our culture did not invent binge drinking.

But let’s pause for a second. What’s missing here? Aren’t you expecting the narrator to give the usual moral commentary on all of this? A stern judgement against this godless, immoral, and indulgent behaviour? Or at least a very thinly veiled insinuation that this was terribly wrong! Yet unlike most other books of the Bible, the narrator doesn’t comment. He doesn’t judge. He just tells the story.

Meanwhile, Xerxes’ wife – Queen Vashti – was busy throwing a banquet for all the women, while their men were off getting tanked with her husband. We’re not told whether the women also spent their time drinking wine. Probably they just had Tupperware demonstrations and watched movies in which a bumbling Hugh Grant finally gets the girl, overcoming the twin obstacles of being both a man … and English. (Isn’t that what women do when men are out? I wouldn’t know.)

On the seventh day of the feast, King Xerxes sends for his Queen to be brought to his banquet. Because, the narrator tells us, she was ‘lovely to look at’. Other translations say ‘pleasant on the eyes’.

Basically, Xerxes wanted to show off his smoking hot trophy wife to all his mates. Again, we note the absence of sports cars.

So Xerxes commands that Vashti be brought before him. And we’d expect the next sentence to be, ‘and Vashti came’. But she didn’t. She refused to turn up. Which makes Xerxes furious. At what was supposed to be the climax of his great show of power, he’s been humiliated by his wife. He doesn’t know what to do. (We’ll see as the story goes on – this is pretty much Xerxes’ permanent state. Has no idea what to do until someone suggests something. Unless there’s wine involved.)

So he calls for Persia’s seven wise men – they’d downsized somewhat by the time of Jesus –  to tell him what to do. The one who speaks up is the one with the coolest name – Memucan. And Memucan turns this little domestic dispute into an international crisis. Have a listen:

1:16b-18 “Queen Vashti has done wrong, not only against the king but also against all the nobles and the peoples of all the provinces of King Xerxes. For the queen’s conduct will become known to all the women, and so they will despise their husbands and say, ‘King Xerxes commanded Queen Vashti to be brought before him, but she would not come.’ This very day the Persian and Median women of the nobility who have heard about the queen’s conduct will respond to all the king’s nobles in the same way. There will be no end of disrespect and discord.”

In other words, Memucan is worried about a sudden outbreak of headaches across the Empire. He’s standing up not just for the king, but for married men everywhere. And so he suggests the king make an example of her, for the good of global domestic harmony.

1:19-20 “Therefore, if it pleases the king, let him issue a royal decree and let it be written in the laws of Persia and Media, which cannot be repealed, that Vashti is never again to enter the presence of King Xerxes. Also let the king give her royal position to someone else who is better than she. Then when the king’s edict is proclaimed throughout all his vast realm, all the women will respect their husbands, from the least to the greatest.”

The narrator records that the king was ‘pleased with this advice’. So Vashti was deposed as queen, and exiled from the king’s presence. An edict was proclaimed throughout the empire that ‘every man should be ruler over his own household.’

And that’s the end of chapter 1. Notice that – despite this being Israel’s Scriptures – we haven’t yet had mention of a single Jew. All we have is the intriguing prospect of a royal vacancy.

Now, read the full text of Esther 1 for yourself.