During the school holiday break, we’re reliving some posts from 2014 which look at Matthew chapters 8 & 9.

Matt 8:23 Then he got into the boat and his disciples followed him. Suddenly a furious storm came up on the lake, so that the waves swept over the boat. But Jesus was sleeping. The disciples went and woke him, saying, “Lord, save us! We’re going to drown!” He replied, “You of little faith, why are you so afraid?” Then he got up and rebuked the winds and the waves, and it was completely calm. The men were amazed and asked, “What kind of man is this? Even the winds and the waves obey him!”

The power of nature is fearsome, unstoppable, and unforgiving. Even in this day and age with centuries of engineering and technological know-how, all we can do is observe it, make attempts at predicting it, and increase our odds of surviving it just a little.

We don’t have to look too far to see reminders of this.Queensland is still rebuilding from devastating floods and cyclones over the past few years. Lives were lost. Homes and businesses were ruined. And communities and their elected leaders are mostly powerless to do much about it. Storms remain beyond our control.

Even ones that are small in comparison. Like the one a year or so ago where we had too much rain over one weekend for our stormwater drains to cope. I heard a bit of noise outside during the night. I noticed the power had gone off at 3am, and thought I’d fix it in the morning. I woke up to a backyard with debris scattered all around it, and a tide mark showing that our yard had filled up with about 10 inches of water. Including the garage, which had a freezer plugged into a power board on ground level, possibly explaining why the circuit breaker had tripped.

Our rabbit, thankfully, is free-range in the yard. He had the sense to hop up onto some piles of boxes in the shed. He spent the rest of the night in panicked prayer (right) watching the rising waters. He was starting to wonder if his invitation to the ark had gone astray in the mail. Even a bit of a storm, in the grand scheme of things, caused a fair amount of chaos in our life.

In fact, in the ancient world, storms and the sea represented the forces of chaos. Ancient shipbuilding techniques were no match for a good storm, causing most shipping in the Mediterranean to shut down over the winter. The Apostle Paul talks about surviving multiple shipwrecks. And in today’s story, even seasoned Galilean fisherman are terrified at a sudden squall on the lake. In the ancient world, storms at sea were even scarier, and took on a symbolic significance. The sea represented all that was dangerous in our world. All that was out of our control.

So when Jesus turns up in the midst of all this and starts calming storms, it’s pretty significant, to say the least. I mean, I don’t know about you, but I’ve never met any storm-calmers in my travels. It tends not to be a common ability. Almost like Jesus is not your ordinary human being. In fact, the only other storm-calmer on record is – well, let’s look at Psalm 89 for a second:

Ps 8:8-9 Who is like you, LORD God Almighty? You, LORD, are mighty, and your faithfulness surrounds you. 9 You rule over the surging sea; when its waves mount up, you still them.

Oh that’s right, God. He’s the one who’s in control over the storms and the sea, calming the chaos. Because he made them. So when Jesus starts doing that, no wonder his disciples said, in a familiar, psalm-like phrase:

8:27 What kind of man is this? Even the winds and the waves obey him!

Even nature submits. Even the forces of chaos are stilled. 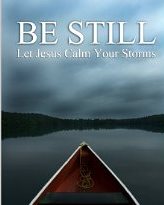 Now it’s tempting – in our own relatively sheltered experience, where we don’t tend to hop into a boat and row out into the sea of Galilee on a regular basis – to translate this message into something more immediately relevant. “Just like Jesus calmed the storm for his disciples, he can calm the storms of your life too.” That one’s got “framed Ken Duncan print” written all over it, hasn’t it?

In case you hadn’t noticed – in this story, Jesus calms actual storms! Not just metaphorical ones. Actual storms! You know, ones with rain and waves and lightning and scared rabbits and people clinging on to broken masts praying for rescue. Those kinds of storms. Real ones.

This story shows us who we’re dealing with. It’s a story of when the Creator went out for a stroll among his creation. The one who spoke, and the world came into being, now speaks, and his world obeys.

Jesus calms actual storms! How amazing is that!

How do we respond to this story, then? We’ll look at that a bit more on Friday. But for now, take along with you today the knowledge that you know and serve a storm-calming God!