We’re continuing our series in how the Bible came about. Over the past two days we’ve looked at the formation of the Old Testament. Today, it’s time to look at the New Testament.

But first, let’s recap the story of how the OT came to be. It began with a core of teaching – teaching about God’s laws and God’s saving actions in Israel’s history. Teaching that was authoritative for God’s people.  Much of it was initially passed on by word of mouth, but gradually came to be written down, along with other material from prophets, wise men, songwriters – all bearing witness to the truth about God; calling people back to this truth; explaining further this truth. Until by the time of Jesus, it was established as a fixed canon, which we know as the Hebrew Bible.

So how did New Testament come about? Pretty much the same way, just in a much shorter timeframe. Let’s take a quick look at that story.

The writing of the New Testament books

An interesting thing about Jesus is that, as far as we know, he never wrote a book. I mean, I suppose it’s possible that archaeologists one day will turn up something like these: 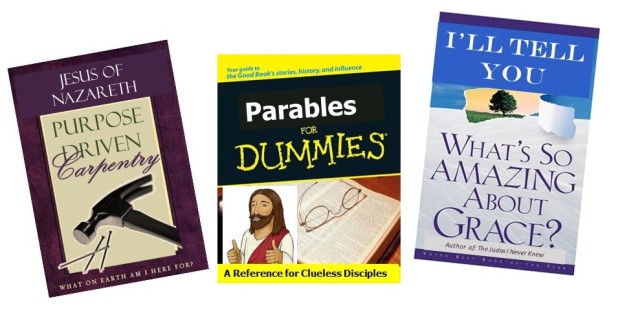 But until that happens, I think we can proceed with the assumption that, in a culture where at most thirty percent could read, Jesus’ teaching was initially preserved by word-of-mouth. And they were much better at word-of-mouth than we are, precisely because they didn’t write everything down, they didn’t have tape recorders, and, as incomprehensible as it might seem, they couldn’t just Google it every time they forgot something. They had what the ancients called a memory. In their head, not just on a stick. And they used it. Vast swathes of Jesus’ teaching, and stories about Jesus, would have been preserved accurately by word of mouth. Unlike me, who can’t remember a shopping list if it contains more than three items.

As well as the fact that most people couldn’t read, culturally a far greater weight was given to testimony in-person, rather than a document. Even legally, a document was second-best to an agreement in person. Vastly different from today, thanks to lawyers. So while we’d naturally want to write down something as important as: the words of the Son of God; or testimony about his death and resurrection – in the first century, this was less pressing. Why write it down when we’ve got the apostles with us? Their eyewitness testimony is far more impressive than some piece of paper.

And not just their testimony. But their theological interpretation of what went on in the life, death, and resurrection of Jesus. Their authorised interpretation, through the inspiration of the Holy Spirit. As Jesus himself said in his farewell speech to his disciples:

John 14:26 But the Counsellor, the Holy Spirit, whom the Father will send in my name, will teach you all things and will remind you of everything I have said to you.

Jesus then commissioned them to provide the interpretation of the events that were about to take place. After his resurrection, in Luke’s gospel, he explains to them how it is that the Old Testament Scriptures are fulfilled by him. Presumably so they can also teach others, as the leaders of the earliest Church.

Who needs documents, when we’ve got the words of Jesus, the eyewitness testimony of Jesus, and the theological interpretation about Jesus – all at our fingertips! All the more so when you realise that they thought Jesus was coming back soon. Like real soon. Any day now.

In fact, it’s when they started to realise that maybe Jesus wasn’t coming back that quickly – maybe not in their lifetime, when some of the apostles & eyewitnesses started to be killed – that’s when they decided to get scribbling.

And if you look at the four gospels, that’s what they are. A record of Jesus’ words; of the events of his life; the eyewitness testimony of his resurrection; and, particularly in the gospels of Matthew and John, a theological interpretation of what it all means. The gospels, then, are simply the writing down of what the apostles had already been teaching, and what the early church had already been believing – for a few decades.

The apostles and early leaders also began to write letters. Some probably earlier than the gospels, because there was a more pressing need. Unlike God, the apostles couldn’t be everywhere at once. The church was growing rapidly, and no-one had, as yet, invented Skype. So although they tried to be there in person, a lot of the time they had to send letters in their place. And these letters – for the most part, they’re just written-down speeches of what they would have said had they been there in person.

Again, what’s the content of these letters? Simply the teaching of Jesus and the apostles, applied to particular situations in the church. The existing authoritative content of the church written down. Are you starting to get the pattern?

Good, because we’ll need to hold onto that thought for tomorrow, when we look at how these writings ended up in our canon of Scripture.

Disclaimer: this one-week series is a brief overview for the curious Bible reader that tries to tell the story of how the Bible was put together. It’s not intended to be anywhere near a scholarly presentation showing all of the different theories of how each book was authored/compiled, or the many competing theories of the canonisation process. Further, it’s not attempting to “prove” the divine nature or authority of Scripture to the sceptical.